In Miyazaki Prefecture, the harvest of blueberries (rabbit eye) is at its peak. There are several blueberry trees in our garden, and they bear fruit. I harvested it and tasted it.

Blueberry (azalea family) is a plant that has survived by preferentially creating a community in the barren land of the world’s acidic soil, seeds are carried by birds and wild animals, and a community is formed in a new barren land, and natural crossbreeding is repeated and the species differentiated. In the North American continent, native Indians have been eating wild blueberries raw for thousands of years, and collected them as dry and preserved food in winter. Because it grows well in acidic soil, it often grows in areas where volcanic ash is mixed a lot. In addition, because it bears fruit even in thin land, it is possible to harvest even in a natural environment and is easy to grow unlike citrus.

Blueberries have some strains. It is roughly classified into high bushing system, rabbit eye system.

The Rabbit Eye system is adapted to the region south of the Kanto region.It is resistant to heat and dryness, but because it is weak in cold resistance, there is a possibility of frost damage in the north from the Tohoku region, which is less than -8 degrees.The tree shape is larger than that of the high bush system, and it is also characterized by a large yield of fruit according to it. The harvest time is from the beginning of July to the end of September.

Blueberry in my house

There are three types: Tiff Blue, which is popular, and Yadkin and Columbus Column, which are somewhat minor. It is all rabbit eye system.

Tiff blue is a variety that has been cultivated for a long time. I replanted it in a sunny place a few years ago, which made my upbringing worse, and now I grow it in a flowerpot. Flowerpots tend to maintain acidity in the acidity of the soil, and they are fine now. Concrete is strongly alkaline and the soil in the vicinity becomes alkaline.

Yadkin has a large fragrant fruit. The trees are strong. Columbus is also a large fruit system and has sweet fruit.

For those who are growing for the first time, I will describe what I did at the beginning of cultivation.
Since the soil is acidic, the acidity is mixed about 10-20% pete moss with unadjusted pete moss. It is often written that compost is derived from chicken manure, but I am sorry when the smell flows to the house next door, so the normal bark compost (vegetable) is 10-20% (it may be more). On top of that, spread a few cm of chips (cheap and OK). If you lay a chip, weeds are hard to grow, and management is easy. It is even better to add a tip about once a year.

Blueberries have shallow roots, so they can be replanted even when they grow, but they are weak in drying, so watering should be given more often than regular trees. However, the rabbit eye system is a person who is resistant to drying in blueberries, so I water it only when very fine weather continues.

Tifblue is easier among the three.Topping on top of the cake will increase the quality of the cake.Rabbit eye system is said to be sour compared to the high bush system, but this Yadkin and Columbus are both very sweet, and it is very delicious even if I eat it alone.I think that it is a considerably sweet one compared with the variety of the high bush system.In addition, Yadkin has a strong elegant aroma of blueberry. This is a preference and it is a matter of whether or not it is recommended.

My blueberry cultivation history has already been over 20 years, and it is presumptuous to say it myself, but it is quite a carrier. When I was in Tohoku region, I cultivated mainly high bushings, and at one time I used to grow my friends Wild Blueberry (low bush) and lotus cup (honeysuckle family).It is important to choose a variety that suits the climate of the land for cultivation.

While citrus is easy to stick to pests and does not come to fruition without the use of pesticides, blueberries will bear delicious fruit in a few years if you grow multiple types at the same time. You can also eat the skin together, so it is very delicious whether you eat it as it is, put it in yogurt, or topped it with a cake. It is recommended because it grows quickly if it is a sunny land even if it is narrow!

“How you feel happy” is determined by the differential value. 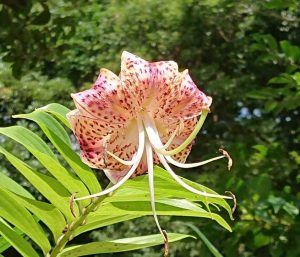 A small shrine with a long history